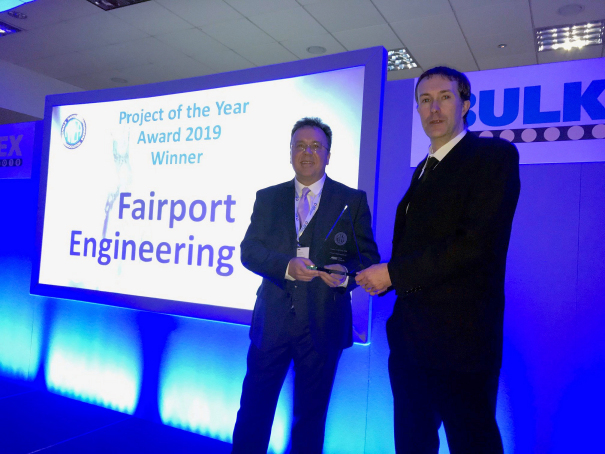 During The MHEA’s recent evening dinner at the Bulkex 2019 Conference it was announced that after careful comparison and consideration of all the nominees, Fairport Engineering Ltd was awarded a hat trick of major awards.

The First of the accolades was for “Project of the Year” which was awarded to Fairport for its work on Ormonde Mining’s and Saloro’s Tungsten Mine project constructed at Barruecopardo, Spain.  At the open mine, in a semi-arid environment, ore from the open mine is processed and then concentrated for further processing offsite. This process helps in many areas of industrialisation such as hard metals, pressing, drilling and cutting and other specialist applications for steels and electronics.

The facility in Spain is rapidly increasing its output which will see the plant producing around 11% of the non-Chinese Tungsten capacity regarding Tungsten concentrates globally. The photograph shows Mr David Cannavan (Engineering Director) and Dr Richard Maslen (Process Engineer) holding, with pride the award on stage after its presentation.

The second of the awards presented was the highly prized “Harold Wright Award” which was given posthumously to Mr Roy Dobson.  Roy sadly passed away earlier this year whilst working in is office at home. Roy worked for Fairport Engineering since 1995 as their Projects and Sales Director and was without doubt widely respected in his field. 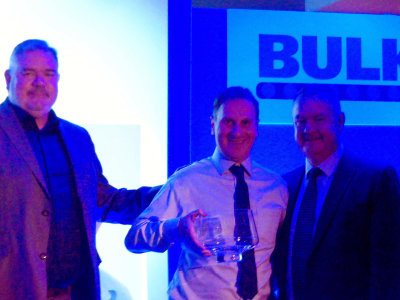 The award was accepted by Mr Ed Simon (Commercial & Financial Director of Fairport’s) from Mr John Connolly, the past President of the MHEA and MD of Kingfisher and Mr Roy Ball who is residing President of the MHEA and MD of Rumelca. The award will be placed in Roy’s memory at the head offices of Fairport Engineering in a prominent place of honour for all who visit to see.

Last but not least the evening was capped off by Mrs Linda White being nominated and accepting the position of Vice-President of the MHEA in recognition of her un-stinting contributions both to the MHEA and the industry as a whole.